Staff Sergeant Eric Myers, a U.S. Army field artilleryman with the 82nd Airborne Division, will always remember the date: May 12, 2012. That’s when the improvised explosive device claimed both his legs during his third deployment in Afghanistan.
Eric was on patrol as provisional infantry when he stepped on the IED. He sustained several serious injuries in the explosion—and both legs were amputated above the knees. 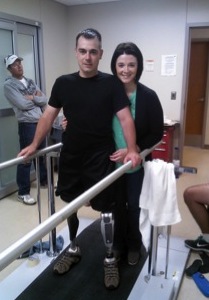 After receiving immediate care for several days at a hospital in Landstuhl, Germany, Eric arrived at Walter Reed National Military Medical Center on May 20, 2012. His wife, Laura, and their baby girl, Kinley, rushed to his side from their home in North Carolina.

America’s Fund, a program of the Semper Fi Fund, met with Eric and Laura shortly after he arrived at Walter Reed. We assisted with grants that not only helped cover their loss of income, but also enabled them to purchase an adaptive vehicle, make home repairs and obtain an Action Trackchair that enables Eric to better navigate his large backyard—and helps him enjoy the outdoors again.

Eric’s months at Walter Reed were characterized by a difficult rehabilitation process. Bolstered by the support and motivation provided by Laura, Kinley and his family—and relieved of the stress that comes with financial concerns—Eric was able to focus on prosthetic care and learning to walk again. He completed his inpatient and outpatient physical therapy programs in less than a year. 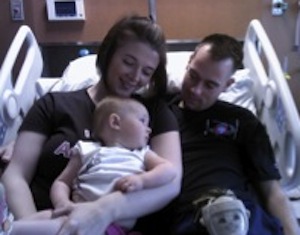 “A huge thank you goes out to America’s Fund for giving Eric even more freedom,” Laura wrote shortly after Eric received his Trackchair. “I had the pleasure of watching my Superman working in the backyard through the kitchen window today. It was the first time he was able to get all over the yard and work without assistance. I had not seen him hauling wood, measuring, cutting and building on his own since before he deployed in February 2012. Needless to say, it was more than amazing to watch him again! His Trackchair has already proven to be a great source of freedom for him. We cannot thank America’s Fund enough.” 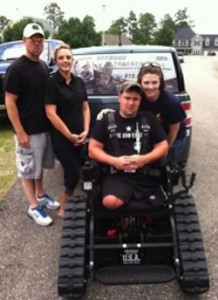 Eric has returned to Fort Bragg, North Carolina, where he continues to serve in the U.S. Army. He plans to retire once his medical treatment is complete.

America’s Fund is honored to be part of Eric’s recovery. We’re thankful for his service to our country and we’re inspired daily by his incredible determination and perseverance. It’s a privilege to be allowed to be part of their lives—and to be able to share their story with you.